SALTERHEBBLE a district between the townships of Skircoat and Southowram. Salterhebble hill is probably well remembered by people travelling from Huddersfield to Halifax due to its steep and twisting ascent into the town. The Calder and Hebble canal passed through Salterhebble and the old docks would have been the scene of great activity handling goods into and from Halifax. An extension of the canal to Halifax was completed in 1828.
SHELF the name of a village and a township. It is the most north easterly of the ancient parish townships. It was very much linked with the adjoining parishes of Northowram and Hipperholme-cum-Brighouse since having no church within its boundaries the people had to worship at Coley church. There were iron works and coke ovens here with extensive ironstone and coal pits. It was part of Queensbury and Shelf U.D.C. but at the time of local government reorganisation in 1974 it was incorporated into Calderdale M.B.C. being rejoined with Halifax.
SIDDAL is located in the township of Southowram across the Hebble valley from the Skircoat area of Halifax. Stoney Royd Cemetery of interest to the family historian is in the Siddal area. The Exley family of Exley Hall were key players in the Elland feud, which has been related under the Elland reference.
SKIRCOAT was a township but it is now an area of Halifax. It lay to the south of Halifax township and was bounded by the river Calder. Part of Skircoat was incorporated into Sowerby Bridge and much of it became part of the Halifax Borough at the turn of the century. Savile Park formerly called Skircoat Moor had somehow escaped the various methods of enclosure and when Halifax wishing to extend its boundaries tried to acquire it they were opposed by the Freeholders of Skircoat who eventually won their case. Capt. Henry Savile of Rufford Abbey accepted the nominal sum of £100 for his rights and the Moor was renamed Savile Park. It has to remain unenclosed for the benefit of the people of Halifax for ever.

a village and a township within the ancient parish of Halifax bounded on the south by the river Calder and on the east by the township of Hipperholme-cum-Brighouse. Part of the township was incorporated into Halifax when the Borough was created in 1848. Lying within the Halifax chapelry there is a chapel of ease situated in the village of Southowram dedicated to St. Anne in the Grove. Southowram was and still is an important quarrying area and a perusal of last century’s census returns will bear this out with almost the whole of the male population of Southowram village being employed in the industry.
SOWERBY was and still is a hill top village, it was also a township within the ancient parish. Lying south of the river Calder it was bounded on the east by the Ryburn stream and on the west by the Elphin brook. The church of St. Peter dates from C.1650. John Tillotson who was born at Haugh End in Sowerby became Archbishop of Canterbury in 1691.
SOWERBY BRIDGE was very much a creation of the Industrial Revolution when the construction of the canal and later the railway provided cheap coal and together with the improvement of steam power brought about the concentration of industry in the valley bottoms. Sowerby Bridge includes parts of the former townships of Norland, Sowerby, Warley and Skircoat.
SOWOOD is a small village located in Stainland township, the majority of its buildings having been erected within the last 100 years.
SOYLAND was a township bounded on the east and south by the Ryburn stream and adjoining the township of Sowerby on the north. Samuel Hill lived at Making place in Soyland. He was a worsted manufacturer exporting cloth all over Europe and in 1747 his turnover was £35,500 which was a vast sum of money at that time. A century later is old residence became renowned as Making Place Academy, one of the country’s most progressive commercial colleges, housing students from all over the world. One boy became Prime Minister Asquith.
STAINLAND 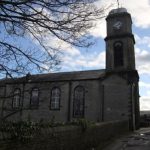 a village and a township which is bordered on the west by the township of Barkisland and adjoins Huddersfield on the southeast. The village of Holywell Green is in Stainland township where the Shaw family had a large textile mill complete with a branch railway line (now disused). Providence Congregational chapel now converted into flats had a large congregation and much of the graveyard still remains.
STANSFIELD a large south facing township bounded to the south and west by the river Calder and adjoining Heptonstall township on the east. It abuts the Lancashire boundary at Cliviger. For census purposes it was divided into thirds and lower Stansfield was within the Hebden Bridge boundary. It was part of the Heptonstall chapelry but due to the size of the area covered a sub chapel was built at Cross Stone within the middle third about 1450.
TODMORDEN now part of Calderdale M.B.C. was granted Borough status in 1896 when parts of the townships of Stansfield and Langfield formerly within the Parish of Halifax were combined with the township of Todmorden-cum-Walsden formerly within the parish of Rochdale. Research in Todmorden can cause problems for the family historian, for although it lies wholly in Yorkshire some of its records could well be in Rochdale or Manchester.
TRIANGLE is located on the turnpike road between Sowerby Bridge and Lancashire and between the townships of Sowerby and Norland. It’s development dates from the 19th. century when the Ryburn valley became industrialised, first with water mills and then following the building of a railway, when steam power took over. The railway line closed in 1958 and the track was lifted in 1962.
WADSWORTH another large south facing township with the river Calder on it’s southern boundary and lying between the townships of Stansfield and Midgley. The upper portion of Wadsworth is high moorland much of it now occupied by six large collecting reservoirs but in the last century it was the home of many hand loom weavers and sheep farmers. Blake Dean Baptist chapel now a scout hostel ministered to the spiritual needs of a thriving population. Some of the most beautiful scenery in Calderdale is situated here in the Hebden and Crimsworth valleys.
WAINSTALLS is a village north of Halifax in the township of Warley. The Calvert family had a large textile mill here, which gave employment to most of the surrounding population and they were also known to have brought orphaned children from other towns to work in the mill. Leaving the village one can gain access to the upper parts of Luddenden Dene, the local wind farm on Ovenden Moor and the moors beyond.
WALSDEN is a village and along with Todmorden also gave its name to a separate township, which was originally in the parish of Rochdale. The road from Todmorden through Walsden goes to Littleborough and eventually to Rochdale. Along with Todmorden it is now part of Calderdale M.B.C.
WARLEY is the name of a village and a township. Warley township adjoins Midgley on the west with the Luddenden stream as it’s boundary and to the east it abuts the township of Ovenden. To the south it stretches to the river Calder and parts of Sowerby Bridge and Luddenden Foot fall within it’s boundaries. Luddenden Dene valley and the ancient hamlet of Saltonstall are situated within the township. The first church to serve the people of Warley was built about 1500 in the village of Luddenden, which is actually just inside.

We can help you with ancestry, genealogy and family search covering all the above areas.